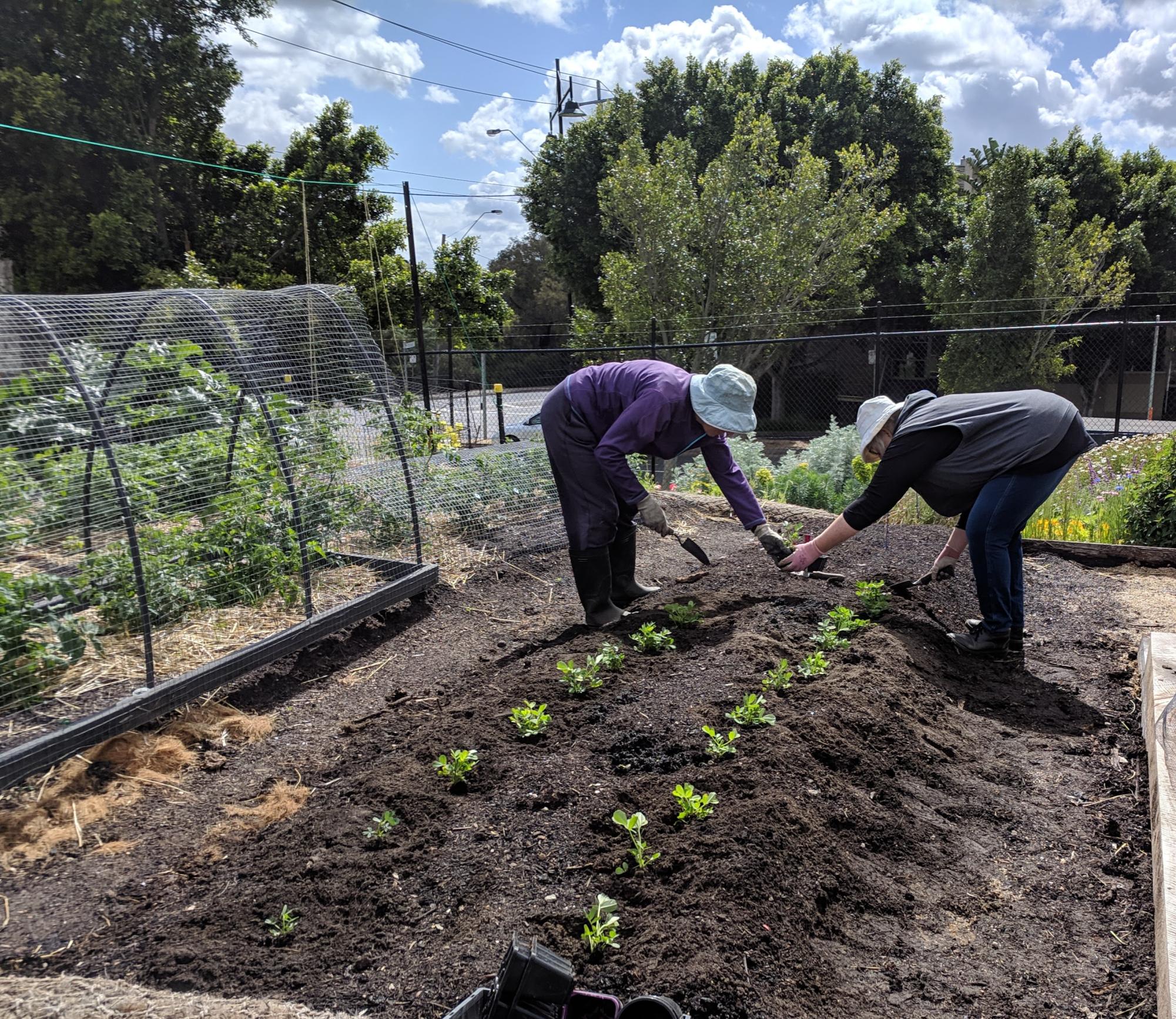 Posted in Pentridge Community Garden By Jessica PeelerPosted on August 24, 2022

Did you know that the lush Pentridge Community Garden only began in 2016? We’ve collated a brief history of this wonderful garden. Click here to read it!

A big thank you to Andrew and Kerry Ogbourne for sharing their vast knowledge about the history of Pentridge Community Garden, and to everyone who has helped shape it in some way.

This is an ongoing project. If you would like to contribute any information or photographs, please contact Jessica Peeler at administrator@morelandcommunitygardening.org.

The idea of Pentridge Community Garden was born when Andrew and Kerry Ogbourne moved from Brisbane to Melbourne in 2015.  Wanting to join a community garden but finding none nearby, they decided to start one. In 2016, they put the call out on some local Facebook groups to gauge interest. With some support from locals, they then presented the idea to the developer of the Pentridge site, Shayher, who were very supportive and agreed to set aside a plot of land.  This was a bit of a surprise, given that securing a site for a community garden is notoriously difficult. Although the site is not permanent and will eventually be developed, Shayher have been nothing but supportive of the garden from its inception. Click here to read Shayher’s online article about the garden six months after construction began.

The 1600m2 plot of land, located at the northern end of the Pentridge development opposite Coburg Lake, was bulldozed and a layer of gravel laid down. Shayher also kindly installed a tall fence around the site, and connected power and water (both recycled and potable).

At the same time, Andrew and Kerry were promoting the garden to try and get as many people involved as possible. They advertised in local Facebook groups, and stuck posters up in the streets, to engage members of the community.

Along with some other early members, they also held a stall at a Pentridge fair, where Jo and Natalie dressing up as giant vegetables certainly caught people’s attention!

They had interest from a wide range of people, from those in their twenties to those in their sixties, who according to Andrew, were all “really keen to do something.” There were a series of public meetings held at West Brunswick Community Garden, attended by over a dozen people, where they discussed next steps. Momentum continued to develop from there, with the first Organising Committee (OC) forming. The original members were Andrew, Natalie, Jo, Russell, Teia, Kat, Belinda, and Patsy.

After forming, the OC quickly realised that in order to make sure the garden could run in an organised and safe way, they needed to either find or become a legal entity that could set out procedures and arrange insurance. Andrew discovered Moreland Community Gardening (MCG), and the OC decided to join so that MCG could organise the paperwork and the gardeners could get on with the gardening! MCG organisers including Libby Harper, Mark Sanders, Kieran Dickson and Liz Morgan, helped the PCG group to negotiate a lease for the land and supported them in overcoming initial barriers as they started to set the garden up. MCG also provided some initial funds of approximately $2,000 to get the garden going.

When they started to build the garden itself, it was the middle of winter, but this didn’t halt progress. They received a delivery of free ‘Back to Earth’ compost from Moreland City Council (the first of many loads), and got their hands on some heat treated pallets which they nailed together to make the first compost bays. They bought some coir logs and a big pile of soil, which were used to construct the first garden beds. Raspberries were the first crop to go in, with canes gifted by PCG’s sister garden West Brunswick Community Garden. As the weather warmed up, they planted summer crops including plenty of tomatoes.

Bunnings Coburg donated tools to the garden early on. They were very enthusiastic and have continued to support the garden since. The group got the basic infrastructure in quickly, including a donated shipping container installed in July 2017 which would later become the shed.

The layout was not planned out immediately, but once the gardeners started putting in beds they realised that they should have some kind of design. Kieran Dickson, at that point a member of the MCG Board, worked with the group to help them figure out what sort of garden they wanted and how the design could best facilitate that. They already felt that they wanted the garden to consist primarily of communal growing space rather than private plots. They didn’t want a traditional grid pattern; they wanted it to be interesting, with no clear sight lines, and “a bit of interest and variety throughout the site” (Andrew). Kieran helped them to really define those things, and came up with a design that has largely been followed:

“We started in one corner, carefully following the plan and then evolved from there. But broadly, the layout of the garden is what you see here.”  (Andrew Ogbourne 2021)

“Surely we would be better off if we have more people…having less personal space and more shared space. Doesn’t that make a healthier community in so many ways psychologically and socially…it’s just a more efficient way to grow food too.”

During this time, there was a new station complex being built in North Melbourne, which involved the removal of several large Peppercorn, Cyprus and Eucalyptus trees. A dozen large logs were donated to the garden through community member Paul McKay, who kindly used his portable mill to transform these logs into useable timber. This timber was used to build raised garden beds, which would become private plots, as well as seats and cladding for some of the IBCs.

“You’ve just got to know people and put your name out there…and get a bit of buzz in the community about what’s going on, and people put you in touch with someone…” (Andrew Ogbourne 2021)

In September 2017, the garden had an official opening day, which was attended by dozens of people.

Because the site is temporary, members can’t install anything permanent. For this reason, fruit trees were planted into IBCs, many of which were donated to the garden. Andrew says planting the fruit trees early on was important, both to obtain a harvest sooner and for what it represents: “That’s something significant…it’s a good thing to get started on.”

The requirement for everything to be temporary has not held the garden back much, with garden beds simply installed on top of the original gravel using materials that can be removed when required. When Shayher decides to develop the site, the infrastructure can be removed and reinstalled elsewhere.

With infrastructure in place and word spreading, the garden continued to thrive throughout 2018 and 2019. Members built more garden beds, grew a range of crops, held Bunnings sausage sizzles and straw/manure sales to raise funds, extended the compost system, ran educational sessions for children and constructed a grassy knoll for them to play on, and continued engaging with new members of the community.

The garden continued to be supported by various groups and organisations including Shayher, Bunnings, and Reground (an organisation that donates coffee grounds to community gardens).

One of the many benefits of having communal plots is that people can meet others with similar interests. The garden certainly isn’t just about growing food; it has facilitated friendships between people from different age groups and walks of life, creating connections throughout the community that otherwise likely wouldn’t have formed.

“I love the camaraderie and little community that exists at PCG.  I’ve met neighbours and made friends over the years.” (Jo Stavers, garden member and former OC member, 2020)

In 2019, Andrew got in touch with Honeyfingers, an organisation with bee hives in backyards all around Melbourne. In exchange for a location to store two of their hives, they take care of the bees and give some of the honey to members. This has been a great way to utilise the area on the northern side of the garden, which is not suitable for growing crops. The bees benefit from access to the flowers in the garden, and they assist with pollination.

The compost has continued to be a central feature of the garden:

“Having the compost is one of the things that’s attracted people to the garden. Having a community compost that people who live nearby can just come and put their kitchen scraps in, and not have to put them in the bin, that caused a lot of people to come down and talk to us.” (Andrew Ogbourne 2021)

The ‘Friend of Pentridge Community Garden‘ membership type is a great option for people who just want to drop off their kitchen scraps without actively gardening.

2020 of course saw the arrival of COVID-19 and associated lockdowns, which presented challenges for the garden. Just before restrictions came into place, a ‘Connecting MCG Gardens’ event was held at PCG, which provided an opportunity for the MCG Board, OCs, and other members to get together. This was the last gathering to occur at the garden for quite some time!

Throughout the remainder of 2020 and the majority of 2021, garden attendance was restricted in line with government regulations. Although the garden could remain open for the ‘essential purpose of growing and harvesting food’, the compost system was shut down for several months, and new members could not be accepted for some time. During the most severe restrictions only one person could visit the garden at a time, for one hour maximum, based on a strict booking system. This removed the social element of gardening, and so the OC and MCG made an effort to engage members through online avenues including digital workshops, members Facebook group, virtual meetings, a ‘meet our members’ series of profiles on Facebook, and a virtual induction incorporating a number of instructional videos for new members.

It took extra effort to coordinate the garden during lockdowns. Tasks needed to be posted online or written up at the shed, and large jobs had to be coordinated between different people across multiple visits. Despite the challenges, there was still someone at the garden for approximately 4.5 hours per day throughout Melbourne’s lockdowns, highlighting its importance  during a difficult time.

“I live in a little apartment, so I am grateful to have an open space for me and the monster (dog) to run. It was a tough year last year, and this year has been weird. The people at PCG are part of my sanity.” (Erin Kirby, garden member and former OC member, November 2020)

The garden continued to pump out produce, and in between lockdowns there were even some in-person meetings and projects that took place, including the installation of the noticeboard at the front gate (big thanks to Andrew, Jo, Katya, and James in particular!), the installation of a native garden bed built in conjunction with Coburg Children’s Centre through a Moreland City Council grant, and the installation of a Portaloo (spearheaded by Russell). 2020 was also used to produce an Amenity Plan that would guide the future priorities of the garden.

Thanks to some local residents lucky enough to have a view of PCG, we have this series of photos showing the garden’s progress from its inception to 2022.

A lot! Current focus areas include: